Resting my tootsies as well as my alimentary system after spending Sunday meandering through the almost never-ending aisles of the Winter Fancy Food Show in San Francisco. This is the premier national food and beverage showcase sponsored by the National Association of the Specialty Food Trade Association, a twice yearly event held here and in New York City (summertime) that has more than 1,500 vendors showing off their wares.

Last year was my first experience with this cornucopia of gustatory pleasure. I swore I’d be targeted and sensible this time around. I’d exhibit some restraint in the face of kindly people relentless in their sample pushing. Decided NOT to start exploring in the cheese and chocolate section as Angela and I did last year.

Somehow, though, upon entering the Moscone South Hall, I found myself instantly in that very section, surrounded by alluring piles of cubed, sliced, crumbled and chunked bleus, fetas, cheddars, chevre and more. The owners and creators themselves are more likely than not to be the person behind the table explaining their product, which makes for a lot of fun and interesting conversations. People are passionate about their products and know their stuff. Thought this cheese tower in the shape of an elegant cake was beautiful, courtesy of Cypress Grove Chevre from Arcata, Calif., maker of rich and delicious goat cheese. Their new  Truffle Tremor is velvety and earthy :

Being a huge fan of Hint Water, particularly their Cucumber, Watermelon and Mango Grapefruit, it was of course a thrill to meet its refreshingly down-to-earth and savvy CEO Kara Goldin. She launched Hint, a naturally flavored bottled water without sweeteners or preservatives in May 2005. The company has garnered a tsunami of press coverage and happy hydrated fans since its inception.

Also in the liquid categories, I found A+ Minari to be very interesting. It’s a unusually flavored but tasty “liquified tea” which contains 26 percent extract from water parsley, sourced from South Korea and other Asian locales. Extracted under a patent-pending process andpurported to “dissolve fat cells” – HELLO! — and support liver function, the drink has “no pigment, artificial flavoring or preservatives, tranquilizer (!), and carbonic acid.” A+ Minari is the only company to have this product, created at Yeungnam University, on the market. Unfortunately I could not find a website on their collateral or online, but I did learn that Minari means Korean watercress, Korean parsley, Korean dropwort, water dropwort and has many other names. Distributed by Sae Earl Bio Food Corp. 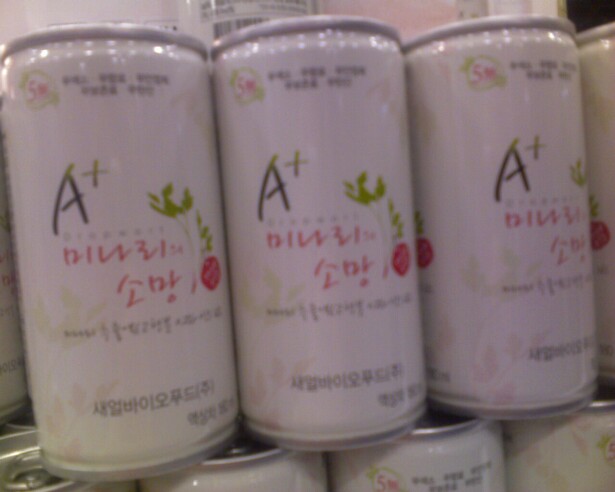 I didn’t discover what is now a diet staple, sushi, until well into my fourth decade. But I had always liked cavier, herring, fish and shellfish. Cavier, of course, was never a diet staple but I’d had enough to know I like it. So it was rewarding to try Canadian product Aqua Gourmet’s Vegeterian Cavier, NO cholesterol, NO calories and YES tasty! It’s made mostly from kelp and it maintains what I think is a big attribute of real fish eggs, the delightful in-mouth “popping”:

And, for all you Baby Boomers who remember eating Flicks at the movies, the chocolate buttons that came in an easy to open and dump in your mouth tube, good news! Flicks are BACK! From their site:

“Flicks Candy” is a chocolate flavored treat that has been around for over 100 years. It was originally developed by the Ghirardelli family in the late 1890’s, but wasn’t called “Flicks” until 1904. It was produced in San Francisco, and then later in San Leandro up until 1989. By that time, the machinery that produced Flicks had been continually operating for nearly 100 years, it had been damaged in its move to San Leandro, and replacement parts were no longer available, as the equipment’s manufacturer had been out of business since World War II. For these reasons, production of Flicks ceased in 1989.”

Until Jim Tjerrild changed all that. His family  acquired the Flicks trademark in 2004, and in 2005, acquired the original decommissioned production equipment that produced Flicks for nearly 100 years. After painstaking reassembly, Flicks are now being created again, this time in Fresno, California. 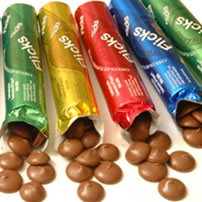 Then there was the GarLic it! Company. Delicious marinated garlic, sliced and ready to go, coming in flavors like Spicy Chipotle, Sichuan Pepper, Thai Peanut, Tomato Curry and Savory Basil. I can see these becoming a diet staple. Very fresh and tasty.